The upper reservoir storage tank (20,000 cubic m, 200 ft diameter, 35 ft tall) for the 9.7 MW Choloma project is reported by the manufacturer, TIPIC SA, to be the largest steel water tank in Central America.

This article describes the design and construction process for a new and innovative 9.7 MW hydroelectric project that was constructed in 2010 and 2011 and came on line for the first time in October, 2011. The project, called "Choloma" is located in northwestern Guatemala in the Santa Cruz Mountains. The private developer, Hidroelectrica Choloma, SA is an experienced hydropower developer in Guatemala, with two other projects already constructed and on-line.

Near the village of Senahu, on the slopes of the Santa Cruz Mountains in northeastern Guatemala, experienced hydropower developer Hidroelectrica Choloma SA (a subsidiary of Secacao Group) saw potential. Nearly 500 m of drop provided ample head for a hydro project, but the main water source in the area, the Choloma River, could only sustain a hydroelectric project of 3 to 4 MW, not enough to make the project economically feasible.

Several other small very rivers flowed down the slopes in the 6 kilometers west of the Choloma. The solution? Six intakes were constructed on six streams and all flow was collected in a 6 km long HDPE pipeline (24¨to 48¨diameter) running across the slope generally following an existing serpentine gravel road. The combined flow allowed an economic project 9.7 MW in size to be constructed. The original intention was to collect all the water at the end of this collector pipe at a small reservoir and dam, which would serve as the headworks for the project. Hydraulics dictated the dam crest be at elevation 647.0 meters, so there was only one suitable location to construct it on the Choloma River. Geotechnical explorations showed poor subsurface conditions for a dam, no bedrock and lots of clay, sand and subsurface water. The solution? On a nearby ridge, a site was cleared, bedrock blasted away, and a large steel water tank was constructed with its top elevation at 647.0 The tank is 200 feet in diameter and 35 feet tall and was the largest steel water tank in Central America at that time. With 20,000 cubic meters of live storage, this tank will allow the project to generate at nearly full load every day of the year during the 4 hour daily peak demand hours in Guatemala, even in the dry season. In the dry season the plant will only operate from 6pm to 10 pm daily, and then shut down for the tank to refill. During the rainy season the plant will operate at full load all day.

In 2010, Rudolf Jacobs, vice president of Hidroelectrica Choloma, contracted with Jack Snyder and Don Jarrett with EES Consulting (EESC) of Seattle, Washington, USA, to develop a design to harness the water flowing through the several small rivers within about 6 km west of the proposed project site. Together, they developed a design to build six small dams with water intakes on six streams. The water would be transported in a 6-km-long high-density polyethylene (HDPE) pipeline purchased from ISCO Industries of Louisville, KY (with a diameter of 24 in to 48 in), which was routed across slopes near an existing road. With the additional flow, a 9.7 MW project could be built - providing enough clean energy to be economic and to help serve the Guatemala grid even during periods of peak demand.

The original intention was to collect all the water at a headworks consisting of a small reservoir and dam with enough capacity to store one full day of water needed to run the project at full load (a day reservoir). This would allow a 4 hour daily peaking operation of the plant, even in the dry season. Hydraulics of the intake and collector pipe locations dictated the dam crest to be at 647 m elevation, so there was only one suitable location to construct it on the Choloma River. Unfortunately, geotechnical explorations at the site performed by Rodio-Swissboring of Guatemala showed poor subsurface conditions for a dam - no bedrock and lots of clay and subsurface water. Not to be deterred, Hidroelectrica Choloma and its team came up with a solution to store water for the powerhouse.

On a nearby ridge, a site was cleared, bedrock blasted away, and a large steel water tank, manufactured by TIPIC SA of Guatemala, was constructed. At two hundred feet in diameter and 35 ft tall, it was the largest steel water tank in Central America according to TIPIC. "I think that using a large tank to collect water from six dams on six creeks, and using the tank as the project reservoir, were the innovations that made this project a success," Snyder said. 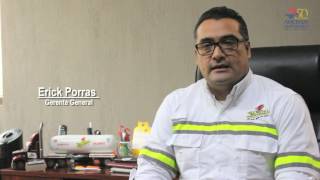